DAY 4 and 5, The Final Leg: Head Lake to Little Island Lake and back home

Wrapping up the last two days of an Algonquin Adventure south of Canoe Lake!! This day started out with an aggressive 1640 m portage out of Head Lake towards Cache Lake.   Despite being the longest, perhaps we had our portage legs about us because it certainly felt the best of the longer hauls. It helped that unlike the first day, this one was relatively flat. 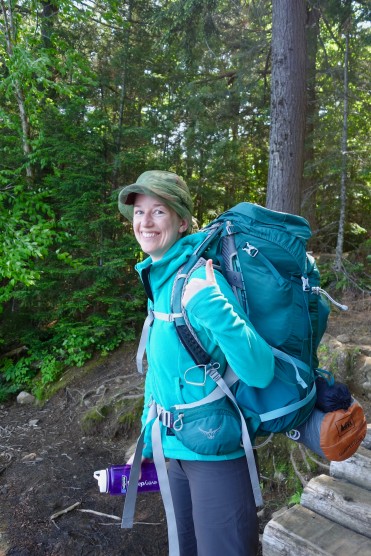 There is something taunting about approaching civilization on a trip.  When we emerged on to Cache Lake, we were met with many boaters zipping by and luxerious cottages dotting the shores of the lake.  Seeing as how we were not paddling to the mainland today, we tried to paddle hard to get back into the wilderness, so not to be tempted by the dream of poutine and chocolate shakes, and to leave the loud boaters behind. Sadly, our next lake, Tanamakoon lake, despite having backcountry sites, was a similar vibe.  Lots of rowdy weekend bachelor parties were occupying some of the backcountry sites and a busy kids camp boat shuttle was running about… Paddle Paddle, take me back to the woods.

A short hop over a swamp (I mean swamp) lead us right over to Little Island Lake, and again, a slice of solitude.   We circumnavigated the island to find the best site.  I was expecting better campsites for the size of the lake.

There was only one non-island campsite on this lake and we actually felt that it had the best offering, good views out over the water and lots of space to make the site home, and not close to swampy water where bugs were lurking.

This site had two rooms on the “second floor”, which were elevated over the main kitchen area. However,  the dark woods behind the campsite held an ominous vibe, especially after dark. But it also had some great sunny rocks along the lake to sit and read, sun or splash. 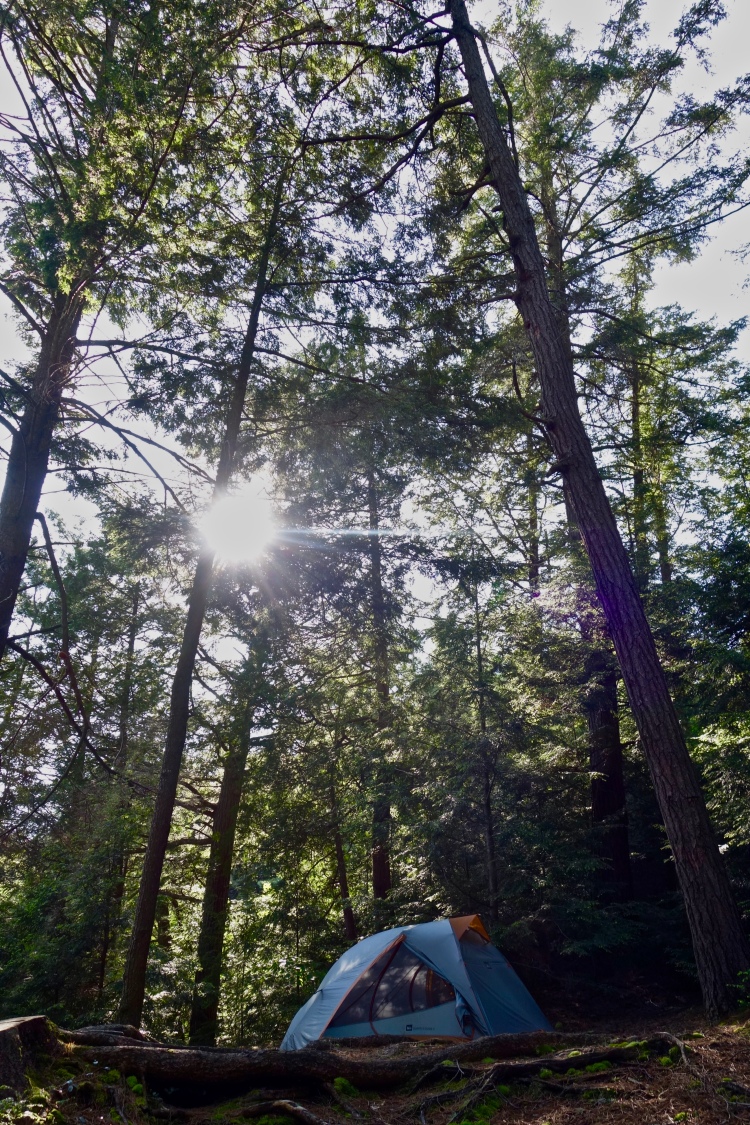 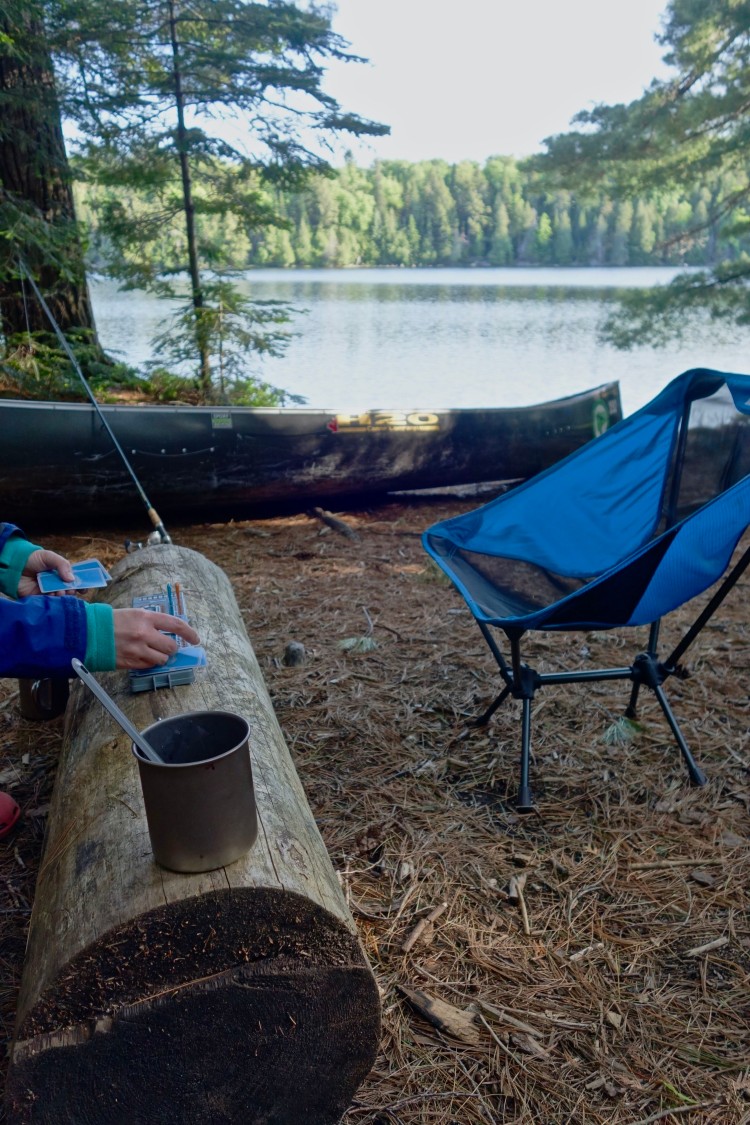 We settled into our last night in the backcountry, spending the afternoon drinking wine, playing cribbage, fishing and cooking up one final deluxe feast.   I tried my hand at a new recipe for Curried Chick Peas from Fresh Off The Grid, which ended up being a huge success.    More on that later ! 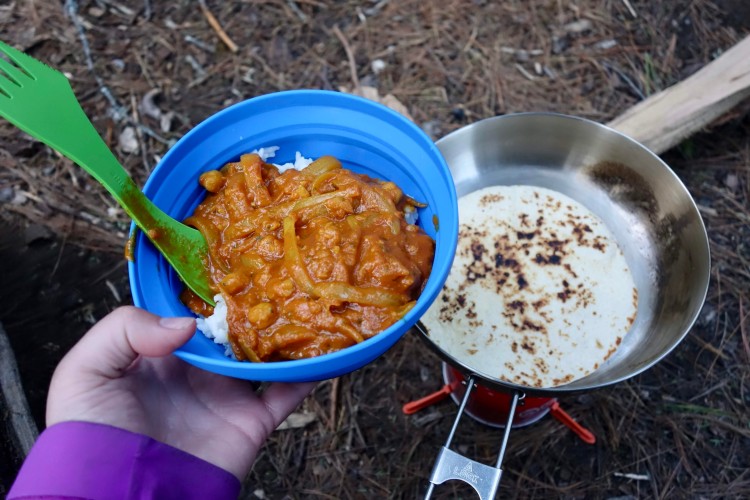 That evening, an uninvited guest felt the need to disrupt our peaceful lake dinner with some rude party antics.  A ruffled Grouse, lurking in the shadows of the bushes behind our campsite spent a good part of the evening beating his little chest, which made a surprisingly good amount of racket, shaking trees and creating a ruckus.   Perhaps he was ticked he didn’t get an invite to the party, or that we were, in fact the uninvited guests in his home. 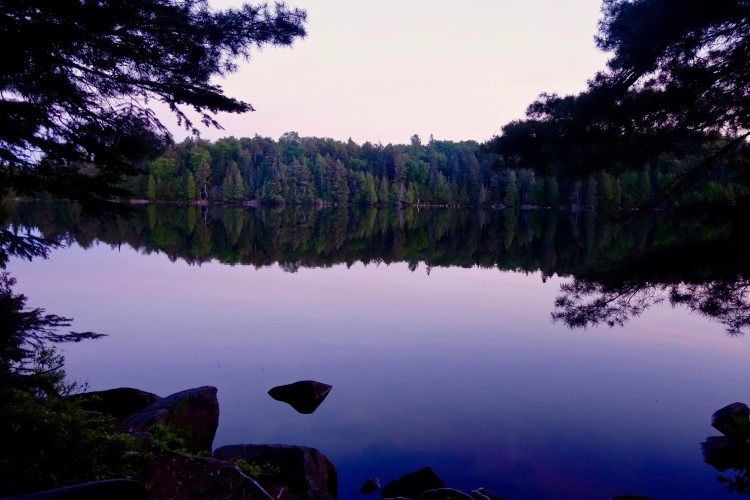 The party continued while we attempted to hang a bear bag on the sparse selection of trees with suitable limbs.  As always, I recommend hanging your line for this well before dark, and well before you try to finish off your last night stash of Pinot Noir.  Despite our missteps in the process, we successfully landed it after an astronomical amount of attempts, all with tears in our eyes from laughing at our misfortunes….because hanging your food in bear country is important, don’t forget that.

The next morning, we made our way out of the woods and back to Smoke lake where it all began a few short days before.   The feeling of leaving the peace and solitude of the backcountry behind is bittersweet.  While a warm shower, a hot poutine and a soft bed seem appealing, the call of the wild and the slow pace of nature life beg to hold on just a weee bit longer. Sarah and I loved the rugged conditions of our canoe route south of Smoke lake this year.  It certainly felt way more remote than any other canoe route we had done to date and we enjoyed some seriously epic backcountry campsites. We were thankful that our timing and effort to get deep into the woods led us to enjoy 5 days of virtually people-free conditions (but bug bountiful).  Algonquin sure does offer anyone who chooses to seek it, a brilliant back-to-basics adventure.   This will not be the last time that Algonquin comes calling…there is plenty more of the park yet to explore.

Before You GO !! Some tips for this route on an early summer adventure: 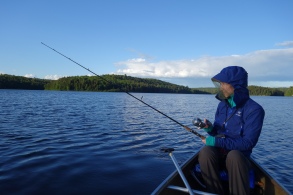 Search for an Adventure